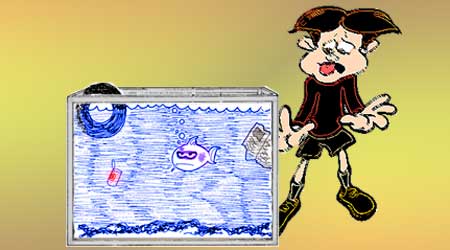 My intent here is not to re-write the “Old Tank Syndrome” article authored by Mike Palleta in the May 2006 Advanced Aquarist online magazine. I simply wish to put “Old Tank Syndrome” in perspective by relating my experience with my now 6 year old coral reef aquarium.

The 75 gallon aquarium has a shallow sand bed (SSB) that is only 1/4″ to 1″ thick and a large volume of live rock. The rock started as high quality dry aragonite rock (~100 pounds) that was purchased from the now defunct “ReefersRock” and Cap’t. Jer.  The rock is in both the 75 gallon in-wall display tank and the DIY 75 gallon sump. Over the years I have added a few small pieces of live rock from various parts of the world, but it only accounts for a small fraction of the rock in the system.

During the first year of operation I added my DIY 6′ foot tall protein skimmer and an above tank refugium to the system. The aquarium has always been fairly heavily stocked but the large sump and skimmer have helped to support the large bioload, at least that is what I thought…

The following is a list of the tanks inhabitants at the time of writing.

I started with many more soft corals than I have now but have gradually moved to predominately SPS with some LPS. I have (had) several large colonies including many Montipora species, Hydenofora, Pocilopora, etc.

I am a firm believer in frequent water changes and try to accomplish a 30% change every month. There have certainly been times when I have neglected my duties and allowed 2 or 3 months to pass without a water change. There are other times that I have done 2 or 3 30% water changes in a single month.

I clean the skimmer at least once a week and try to keep the glass fairly clean using a mag float. When I was new to the hobby I tested Calcium, Alkalinity, Magnesium and Nitrates on a fairly regular basis. In the past few years I have not done any (I mean ANY) water testing as I felt that I had a good handle on the water quality and parameters.

The refugium was partially neglected and excess chaetomorpha was only removed when it became so thick that it was a nuisance. I somewhat blindly allowed detritus to build up (maybe 1/4″ thick) in the base of the sump and the refugium. As with the water testing I felt comfortable in my decision to blindly trudge forward based on the fact that the tank was thriving and I had a super skimmer as a safety net.

I am a habitual over-feeder and have always felt comfortable overfeeding because of the very efficient oversized protein skimmer. I have lost very few fish since the tank was established and the ones I have lost have been the result of power outages or equipment failures. On the other hand, I have struggled with some SPS and LPS corals over the years and assumed that lighting and predation were the chief causes.

In July of 2010 I hosted the annual PMASI club picnic at my home. In the spring before the picnic I lost several large SPS colonies due to an overheating event where the dear woman opened a few windows for “fresh air” and neglected to turn off the furnace. While the upstairs was a comfortable 65°F the basement was 95°F and the system overheated. Nonetheless, I purchased several very large SPS colonies from the LFS to fill in the large bare spots a few days before the picnic. To my complete surprise all of the new SPS colonies were in severe decline within a week of placing them in the tank. Assuming there was some type of water quality issue, even though the rest of the tank (including the 4 year old Maxima clam) was thriving, I did several large water changes.

The damaged SPS corals never recovered, but the rest of the tank continued to thrive and did so until this spring (2011). In early May I was given several SPS frags from a fellow club member and purchased a few more from the LFS. As soon as the coral frags were introduced to my system they began to decline. It was becoming very clear that there were water quality issues in my aquarium and I assumed them to be phosphate related even though I did not do any testing. I decided to run PhosGuard in a power filter in hopes of correcting the issue (again without doing any testing). As soon as the PhosGuard was placed in the system my 4 year old happy clam began to gape. A quick internet search revealed that others had reported similar events with clams exposed to PhosGuard or alumina based phosphate binders. I quickly did several emergency water changes and removed the PhosGuard but the clam was dead within 3 days. Shortly following the clam death I lost several heads on a long established LPS coral colony. At this point it was painfully obvious that my reef aquarium was in rapid and severe decline. Of note is that during this entire time I have not had an algae problem in the tank. This may have been due to the presence of the refugium and the large herbivores that reside in my aquarium.

Clearly my super-sized skimmer and husbandry techniques were not enough to sustain the quality of the water column but I had no idea to what extent because due to the absence of water testing. The first order of business was to order a few of the new Hanna Instrument Company “Checker HC” colorimeter products. I placed the order and began doing 30 gallon water changes, one per day until I consumed an entire 200 gallon box of Reef Crystals. I pulled the (somewhat neglected) refugium offline assuming it was part of the problem and siphoned as much detritus from the sump and display as I could.

The HI-736 “Ultra Low Range Phosphorus Checker HC” arrived several days later and I started testing to see where the aquarium’s phosphate levels were. The HI-736 reads 0-200ppb of Phosphorus. The reading can be converted to total Phosphate in ppm by using the following equation:

So after 200 or so gallons of water changes I decided to put the new test kit through its paces. The jaw dropper… wait for it… The reading was OFF THE SCALE. My reef aquarium had AT LEAST 0.613 ppm of phosphates. A healthy system should be lower than 0.04 ppm!  I did a few more water changes and the readings were still off the chart! Was my phosphate 1.0? 0.8? I didn’t know but it was clear that I had a mess on my hands. I again started doing 30 gallon changes per day to see if I could bring the levels down to the point where they would at least register within the readable ange of the HO-736 meter.

A week and another box of salt later it was clear that my problems were indeed more serious than expected. While I could get the readings down to .4ppm or .5ppm after a water change, within 48 hours they would climb back above the range readable by the HI-736 meter! It appears that my substrate and rock had sequestered tremendous amounts of phosphate and that each time the levels in the water column dropped, the rock and substrate would leach phosphates back into the water column. I have no idea how long this could go on, but 400 gallons of salt later and I was still well above the .613 ppm maximum scale reading of the HI-736 phosphorus checker!

After doing a lot of research and weighing my options I decided to start using Lanthanum Chloride to bind the phosphate and remove it from the aquarium. GFO and similar phosphate binders work very slowly and have a rather limited capacity. Attempting to lower the high levels of phosphate in my system via water changes and GFO would have been costly. To this point 400 gallons of change water and 1 pound of GFO did not appear to make a noticeable or measurable difference in the water column of the aquarium.

I ordered several 5 micron filter socks from an eBay vendor and set out to find a source for Lanthanum Chloride. Most of the local swimming pool suppliers carry phosphate binders, but few of the labels indicated the chemical content of the product. Luckily a club member had also run into similar issues and had started dosing “Sparkle” a product by Magnavore. The “Sparkle” product is Lanthanum Chloride packaged and sold to the aquarium hobby. I do not intent on explaining the process in which the Lanthanum Chloride binds phosphates or the possible dangers of using the product. Here is a link to a very informative Reef Central thread on the subject.

As I expected, the Lanthanum Chloride sharply reduced the phosphates and after 2 doses my readings were within the useful range of the HI-736 checker. They measured readings did swing back up above the .613ppm levels a few times, indicating that there was still plenty of phosphorus leaching from the rock and/or substrate. The goal was to keep reducing the phosphates and eventually pull the sequestered phosphate from the rock and substrate. The process continues a week later and once the levels fall within a stable, reasonable and manageable range, I will discontinue the use of the Lanthanum Chloride and begin using GFO and regular water changes to keep phosphate levels low.

While I mostly agree with the article by Mike Paletta and the information regarding “Old Tank Syndrome” I am now convinced that it is an inevitable circumstance for most reef keepers, not a result of neglect. While we now have ready access to products that will bind phosphates and remove them from the system, most of us do not use them. My maintenance skills are not stellar but have been fairly good over the years and I ended up with unthinkable amounts of phosphate sequestered in my rock and substrate. I am sure the rock and substrate are where the phosphates were being stored as there is no other place else it could have been coming from.

The fact is that we put large amounts of phosphates into our aquariums and assume that our water changes and skimmers are taking them out in sufficient quantities to maintain a long-term healthy system. My contention is that most of our systems are storing those phosphates in DSBs, live rock and other permanent structures in the aquarium and that most of us will end up in the same position I found myself in this spring! I now feel that it is imperative that every reef keeper work diligently to remove phosphate from the system before it becomes sequestered. Water changes and aggressive skimming do not appear to be enough and GFO or other means of binding phosphate must supplement the accepted methods of phosphate removal. Products such as Lanthanum Chloride can be used, but their long-term effects are still in question so I would hesitate to recommend their regular use.