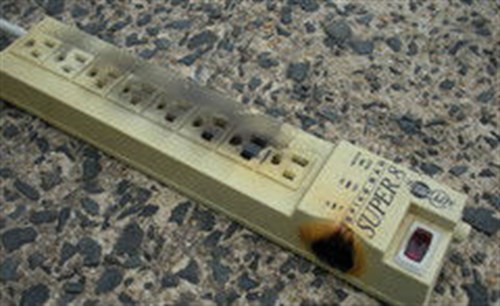 One would be hard pressed to find an aquarium that does not utilize at least one power strip (surge strip, power bar, plug strip, etc.) type of extension cord. Most people are blissfully unaware of the fact that not all power strips are created equal and that some of them are in fact not at all suitable for use around an aquarium. Power strip failures can cause shock or fire hazards and are much more common than one would believe.

The simple fact is that power strips used in the aquarium hobby are commonly exposed to harsh environmental conditions that they were not designed to accommodate. While many of the products work relatively safely in normal use conditions around the home, they pose a great risk when used with an aquarium.

There are two basic types of construction used to build power strips (plug strips,power bars, surge strips, etc.). While there are many variants of the two basic styles, there are enough similarities within each family to draw some general conclusions about their suitability for use around the aquarium (and your home in general).

By far the most common type of plug strip (power strip, power bar, whatever you like to call them) is the style comprised of a monolithic outer case with slots cut or molded into the cover to form individual receptacle locations. They usually have a simple set of continuous copper contacts that form the electrical connections inside. These power strips are most often made entirely of plastic. Below are examples of this type of power strip:

Because the entire case is often made of plastic, this type of plug strip is very prone to melting or catching fire if it overheats due to an electrical fault or other overheating event. Below are more common examples of this type of power strip.

The two examples above show plug strips that have been fashioned to look like higher quality commercial plug strips manufactured with real simplex receptacles, make no mistake, these are not commercial quality plug strips!

Low quality electrical contacts are another common trait of consumer grade plug strips. In many models the copper contacts that make the electrical connection to the plug blades are simply thin strips of copper embedded in a groove in the plastic. The design does not provide for spring action to help press the contacts against the plug blades and over time the connection can become loose. In some of the very poor designs the plastic holding the contact strips in place can become softened due to the high heat that can result from high current flow and/or the already poor connection. The softened plastic can allow the copper contact strips to move away from the plug blades causing more resistance and more heat. Below are photos of a typical consumer class plug strip and the internal copper contacts.

In each of the above designs, the individual outlet locations are actually parts of duplex (top photo) or simplex (middle and bottom photos) receptacles that have been built into a metal case and then wired together. Each individual receptacle has its own contact “leafs” similar (or identical) to a standard commercial grade wall receptacle. This is the type of power strip (plug strip) that you should be using for your aquarium (and in the rest of your home). Pictured below is a cut-away drawing of a typical duplex receptacle that shows the electrical contacts.

Many plug strips are sold with thermal type circuit breakers built in and some with built in GFCI protection. The circuit breakers can help to protect the plug strip in the event of a severe over-current condition but in most cases are very slow (far too slow) to trip. Below is a typical time-current curve for the type of thermal circuit breaker found in many outlet strips.

By looking at the time-current curve, it is clear that a typical 15A thermal circuit breaker would take as long as 4000 seconds (over an hour) at a current of 20 Amps! Note that if the power strip was plugged into a 20A branch circuit that the branch circuit breaker WOULD NOT trip! The result is a real world possibility of the power strip overheating and catching fire. To that end, numerous models of power strips have been recalled due to known instances of them causing fires. One such model is the EFI P-50ES. A simple Google search of that model number will result in numerous publications showing fires that have resulted from use of the poorly constructed power strip.

Many plug strips are sold as “surge strips” and have components called MOVs (see sidebar) built in to help absorb surges on the power line. While MOVs do work with certain types of surges, they can only absorb a finite number of surges. That is, surge strips have a limited life and the entire surge strip must be replaced when they wear out. In fact, surge strips with MOVs should be replaced as regularly as every 12 to 18 months (depending on the power quality where they are installed). Some surge strips even have indicator lights that show if the surge protection MOVs are still viable. The problem with MOVs is that when they wear out (or get hit by an extremely large surge) they can explode and/or catch on fire!

The bottom line is simple: If you want (or need) surge suppression then you MUST use a commercial grade device with a steel or aluminum case that is not prone to fire when (not if) the MOVs suffer catastrophic failure.

Do you need a surge suppressor for you aquarium equipment? Absolutely NOT! If you have sensitive electronics (reef controllers) then one may make some sense, though a quality surge suppressor (called a TVSS) would be a much better option. TVSS (Transient Voltage Surge Suppressors) are typically tied to the home’s main distribution panel. They are capable of handling MUCH larger surges (due to the high number of MOVs and/or Avalanche Diodes) that are potted inside them. That is, a quality TVSS will have the components embedded in high temperature epoxy so that they can not burn if they fail.

There are several reasons for catastrophic failure of plug strips. Overloading is certainly an issue that can cause overheating or a fire but so obvious that it does not warrant more than a mention. One of the most common is failure of the MOV surge suppression devices that are contained withing many power strips. As mentioned above, an MOV (Metal Oxide Varistor) can only handle a finite number of surges before it fails. When an MOV fails (either due to repetitive surges or exposure to a surge larger than its rating) it can (and often does) burn. If the failed MOV is contained inside of a plastic container (the body of a surge strip) container can very easily catch on fire. For this reason, plastic surge strips should be avoided at any cost!

Plug strips used around salt water aquariums may be subjected to a high level of moisture, spills and salt creep. Saltwater (and salt deposited due to evaporation or spills) is highly conductive  and can easily allow fault current to flow between the HOT and NEUTRAL or GROUND conductors of a power strip. If the current flow is between the HOT and GROUND it will not trip a GFCI breaker or receptacle that is powering the strip! Such fault current are easily strong enough to overheat a plug strip and start a fire without ever tripping the breaker. Corroded contacts (as a result of exposure to moisture, humidity or spills) create high resistance connections. Such connections are prone to overheating and create a fire hazard.

Below are a few examples of various surge strip failures (found on the Internet) that have melted or burned. In the first photo the melted/charred area on the front side of the case is where the MOV surge protectors appear to have overheated and burned. The fire likely caused a short and melted plastic that resulted in the smoke damaged top.

The image above shows burned MOVs in the surge protection area of a surge protector.  The image below show a the results of a full meltdown and fire.

It is best to use drip loops on all cords so that dripping or running water can not follow the cord and drip into the power strip. Unused receptacle locations should be taped over or plugged with child safety plugs so that the contacts are not exposed to spills, moisture or salt creep.

The above image shows inexpensive child safety plugs that can be used to help protect unused receptacle locatiions from spills, salt creep and corrosion.

Consumer grade plug strips should be avoided in favor of commerical grade plug strips. While manufacturers like Tripp-Lite, Hubbell and Leviton all make very good commercial grade products, they do also make some lower end consumer products so you must be careful what you buy.

Most modern outlet strips have over-current protection (circuit breakers) but they should not be relied upon to safely protect the power strip as many fires happen at current well below the trip threshold of the circuit breaker.

NOTE: A UL listing is importnat but by no means does it denote quality. All of the examples of melted or burned power strips above were UL listed devices!

If GFCI protection is important to you (it should be) then building a DIY power distribution center or GFCI power snake is a viable alternative. With a little bit of effort you can build several high quality GFCI power snakes to protect your aquarium, yourself and your family.