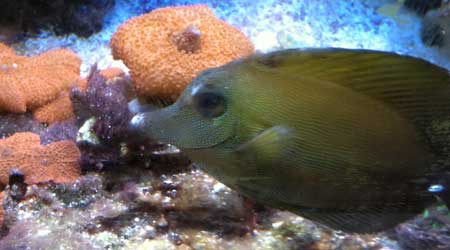 LaCl3 (Lanthanum Chloride) is a salt that is commonly used in research and as a phosphate binder in swimming pools and spas. The Reef Aquaria hobby as started to adopt it for use in binding (for the purpose of export) phosphates in reef aquariums. This trend may partly be attributed to an article by Joe Yaiullo for Advanced Aquarist in 2007 and a subsequent article “Foiling Phosphate” in Coral Magazine by Daniel Knop in 2009.

Before we move forward, let me say that what follows are simply my observations and not a scientific study. I simply intend to recount my personal observations related to the dosing of Lanthanum Chloride in my 75 gallon reef aquarium.

As I mentioned in my Old Tank Syndrome article, I don’t wish to get into the science of how lanthanum chloride works. My goal here is to simply share my experience with lanthanum chloride and the now somewhat common advice that it may be harmful to “tangs”.

My battle with high phosphates has gone on for the better part of a year and sadly, I am not winning. I can knock the phosphate levels down to lower than .02 ppm (according to my HI-736 ULR phosphorus checker) with Lanthanum Chloride. As soon as I stop regular dosing the level rises back to 0.09 ppm within days.

Several forum posts and internet articles related to dosing Lanthanum Chloride have mentioned that “Tangs” can be adversely effected by the chemical. Reported symptoms have included erratic behavior, rapid breathing and in one case the death of a Yellow Tang. It has been postulated that the Lanthanum Chloride precipitates in (and partially clogs) the fine gills of Tangs. I don’t have the background or skills to determine if this idea has merit. In any case assuming that this is the case, the advice has been to dose the Lanthanum Chloride into the inflow of the skimmer and/or fine (5 micron or smaller) filter socks. The apparent logic being that if the dose is small enough and in a filtered area, all of the Lanthanum Chloride will be reacted and sequestered before it can make it into the tank, where it could react (precipitate) in the fishes gills.

In my quest to lower my phosphate and out of mounting frustration, I began using the Lanthanum Chloride on a more regular basis. I planned on keeping volumes low (1ml a day) diluted and spread out over the entire day. It was my hope to keep the phosphate levels low and eventually rid the system of the excess phosphate. Sadly, 5 days into the dosing regimen, I noticed my healthy Scopas Tang was in somewhat poor shape. It appeared that he had been in a street fight, with tattered fins and some displaced scales. I did not immediately make the Lanthanum Chloride connection and assumed a fight with another fish. I continued to dose for another day or two. Each day the Scopas Tang looked worse and by day three was missing most of the skin from his nose, breathing extremely rapidly and very weak with every fin on his body tattered.

How could an otherwise fat and healthy 5 year old Scopas Tang go downhill so quickly? None of my other fish (Tomini Tang, Hybrid Angel, Black Cap Basslet, Etc) showed any signs of stress or damage. I stopped the Lanthanum Chloride dosing and did a huge water change, as I could not think of anything else to do. I conferred with several trusted club members, including Anthony Calfo and we concluded (based on the visible symptoms) that the Scopas Tang may have a bacterial infection and antibiotics may be needed to save him. At this point, I had not even considered the Lanthanum Chloride and had only stopped dosing it due to the large water change.

I prepared to administer antibiotics but was delayed waiting for them to arrive. The Scopas Tang was target fed for several times a day as I waited for the medicine. By the second day (after the water change) the fish was eating well and showed vast improvement with energy level and was breathing at a much more normal rate. I decided to hold off on administering the antibiotic due to the fish’s improvement. By day 4 or 5 the fish had almost fully recovered with most of the skin on the nose area growing back and the fins looking normal again. Two weeks have passed and the Scopas Tang looks as healthy as he always did.

I have spent considerable time over the last week or so trying to track down the sources of the many internet forum comments warning about “Tangs” and Lanthanum Chloride. I have not been able to find any detailed information but there is a common theme, Yellow Tang, Purple Tang, Desjardinii Tang, and my Scopas Tang. That is, all of the warnings or anecdotal problems have involved Tangs of the genus Zebrasoma. Nowhere do I see any mention of Tangs of other genera and in my system the Tomini Tang (genus Ctenochaetus) showed no signs of stress or erratic behavior.

What Happened? I am not sure but assume that dosing the Lanthanum Chloride on a slow but continuous basis drove the phosphate levels in the water column low enough to allow free (unreacted) Lanthanum Chloride to find its way into display. This, in one way or another, had an almost deadly (and cumulative effect) on my Scopas Tang (genus Zebrasome). The initial problem may have been stress due to reduced gill function and I assume the fin tears, missing nose flesh and other physical damage was due to stress induced thrashing.

In a recent conversation with Anythony Calfo regarding my observations it was postulated that the free lanthanum chloride may have been attracted (bound) to the algae growing in the display and the Scopas Tang’s condition was a result of direct consumption of the algae in greater quantities than any of the other fishes in the aquarium. While there is no scientific evidence to prove this theory, it is interesting and warrents furher investigation.

While I eat fish on a regular basis and don’t feel the same level of affection (if any) as I do my dog or cat, I do feel terrible that my actions may have caused that level of stress in an otherwise healthy and happy fish. Using the observations above, I have adjusted my strategy for phosphate reduction.

From my observations (and based on the advice of others like Joe Yaiullo, Daniel Knop, etc) the Lanthanum Chloride should be HIGHLY diluted with ro/di water and dripped into a filter sock, skimmer or other device that will give it time to react BEFORE it reaches the display. I would add that it should only be used for VERY HIGH ( > .1 ppm ) phosphate. It appears that at lower concentrations the Lanthanum may not “find” the phosphate fast enough and may end up in the display, doing possible damage to livestock. GFO or other export methodology should be employed at levels below 0.1 ppm, at least in my opinion.